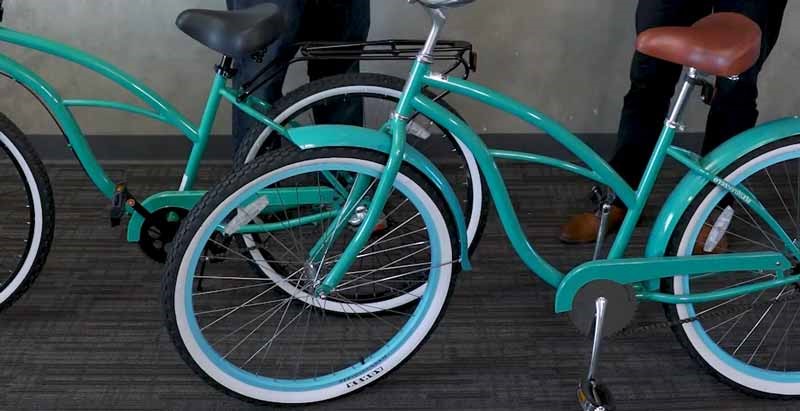 So, we’re going to get an expert opinion on the differences between these new models, how they vary riding positions, the whole these years’ experience.

So, everyone can better understand which bikes are right for them. Now I’ll start off and I’ll kick us off. There are a lot of times we compare bikes. There are actually major differences between these bikes.

There are no major differences. One thing I’ll just start off by saying is the riding position of these two bikes is exactly the same.

So, handlebar, same tires, same treads, the same rims, a little bit different peak can get into that but in terms of the feel, when you sit and your back and your arms.

You want to dive into a little bit more of the specifics on what makes these two bikes different. This is one where the nuances matter like does he say that it’s not these aren’t vastly different bikes.

They both do share that classic cruiser frame that’s been around for so long.

There’s a lot of elements and design that go into the best cruiser bikes for women that you’ll see. So like with this one, we specked it out with you know, the Brown’s seat and grips that match and then some upgraded, barefoot pedals here.

One improvement that’s hard to see to the novice is that these are upgraded rims or stronger rims here on the women’s cruiser.

Then we have now discussed design elements and it’s a solid change. This stuff kind of elevates the look of the bike and the style, and you’ll see it with our paisley with the breeze, with the serenity, and with the other models, they’ve all had that special attention to detail to make the bike cute.

So, I’ll point out the seats and the women’s cruiser has an upgraded seat. You can see from the stitching the materials it’s a little bit higher-end saddle the materials and actually, the factory they come from is different.

So, you are going to get an upgraded saddle on the women’s cruiser versus the around the block.

One similarity from a speed from an options perspective is both of these bikes are available in single 37 and 21 speed. The colors get a little more limited with the women’s cruiser.

When you move up to the 21 speeds, same with the seven speeds, but both are available in the same options. Now the round, the block actually does come with a rack women’s cruiser does not come with a rack.

That’s one difference but the other thing is when we look at our bikes, we like to think of them and three different spectra levels.

Sometimes we go for fanatical dedication and casual. Now what we’re looking at here is the dedicated version of it around the block and the fanatical version of the women’s cruiser.

From a spec perspective, we actually don’t spec the around the block at the fanatical level and it’s just for this type of bike. The use cases, usually these specs are good for the rider base.

We’ve found now the women’s cruiser. We’ve just tried to do something a little bit extra for a cruiser, make it look a little bit nicer and feel a little bit better.

So, you’re going to get a little bit more in the specification with the rims and the crank also the pedals on the women’s cruiser are an upgraded pedal.

They have a metal versus plastic and there is an entirely plastic molded pedal around the block. So small differences, not major. I would say the biggest distinguisher is the design element of it.

It’s not going to be a major differentiator and that’s the truth of the designs, you know, with that said small, smart, smother, small differences, this as an integrated kickstand and it’s just welded into the frame.

Single-speed is both coaster three-speed is the front handbrake, rear coaster seven and 20 ones are front end handbrakes.

So now there is a question coming out which bike is more fitted for me? Basically, it all depends on you, Your riding style, riding habit, and lots of other things.

So, what do you think does that pretty much sum it up and covers it right there? Well, if you have any other questions significantly about bikes, please visit OutdoorXsports for more information.

How to Replace Bicycle Shift Cable Solve It

How to germinate cherry seeds?

How to clean my suede couch: tips and tricks to make it bright